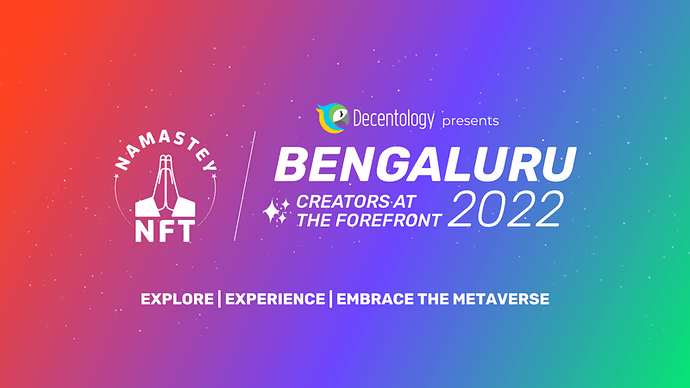 As far as there are other DAOs based in India, we called Naksh Marketplace, Graffity DAO and NEAR NFT Club as well. For the first time it was decided to explore the event by small expedition group of GoaDAO and Graffity DAO

What GoaDAO is going to bring in case of participation:

so the whole activity is aimed to bring/onboard new members to NEAR [on the way to mass adoption] through
-workshops on NEAR NFT-platforms (educational side),
-metaverse party (entertainment and encouraging side) and
-small NEARdrop and NFTdrop (pleasant gift for memory)
to increase awareness about NEAR platforms and dapps, and its visibility during the event among number of target people

Measuring success:
-number of activated NEAR wallets and NFTdrops
-numbers of stories, tags and mentions of our activities in social media
-number of Tamago metaverse party visitors

Graffiti DAO Like to Participate in the Namstey NFT event, As Our NFTs and Project are new, Also People Around the world going to join, We are going to Showcase Our NFTs Graffiti and Design and Sell Through NEAR Mintbase.

We also Going to Onboard Indian Graffiti artists for the event So they can Also Promote Our DAO in India and WorldWIde Globally.

Expecting NEAR WALLETS around more than 1,000 (neardrop with GoaDAO) + Free NFTs (FROM PARAS)
Getting More Exposure in Graffiti ART in India Too After Nigeria and Italy.
Onboarding Graffiti Artist for Graffiti DAO
Connecting More Projects and Influencers to Collab and Connect them With Near

@marketingdao-council Whats Your Thoughts in these Proposal .

In India Events of NFTs are rare Happen , So that’s Why I think we can get lots more Exposure here

Happy to support your proposal. Have a great day.

The expected outreach of the event with 8K-10K participants as mentioned on the website is a good number to connect with.

I have one question, as a representative of NEAR NFT Club

To promote the mentioned things on the proposal do you guys have already Collaborated/Sponsored with/to the Namastey NFT Team?

For more visibility I am tagging some of the Indian based community managers/founders to review and connect with you guys.

thank you for your reply @naveen_in

no, we have never collaborated before
that’s why it’s testing visit to get to know the Team and the event, and that’s why we don’t plan to make 8-10k near drop

Thank you for letting me know about this. This definitely looks like a great opportunity for UniqArt to expand and gain more traction in India. Would love to know how I can contribute to this

Firstly We Thought To Collab with as Title Sponsor and own Workshop , But Because of Delay in Time and information , We thoughts Let try with first event as just Individual , DAO and Project

Also We Created the Group to discuss on These Event .

Namastey NFT - NEAR Event MAY✨

Thanks for your thoughtful and detailed proposal. I’m happy to support this. Looking forward to the Report after the event so we can measure success and draw lessons for future, similar events.

appreciate everyones support
in collaboration with more DAOs i feel we can bring more value as to NEAR ecosystem , as well as to the event

as far as the event is coming quite soon, and we wish to provide high quality of preparation, i’d ask to help with proceeding the proposal without big delays, so we can be in time with everything.
thank you @marketingdao-council

Well-written proposal. You’ve got my support.

Sounds great. Let me get in touch with you

You have the support of the majority of the MarketingDAO council so I am moving this to approved. You can post on Astro – please include the funding request amount and currency you are requesting funds in your Astro poll. Thanks!

hello ! Your proposal was Approved on the forum.
Please, follow these steps to get approval on Astro DAO

Hey, @naveen_in, Thank you for tagging in

We had an excellent talk with Ashwathy Menon, part of the Namastey NFT Team. After the long discussions, we understood that we would need a booth or a stall under the event’s sponsorship category to carry out the activities mentioned above.

@johanga & @Albhion mentioned that it as a free event to attend. But the Namastey NFT team has agreed to provide a free stall/booth in exchange for any creatives activities, such as helping the visitors experience VR/AR Metaverse. But this is considered volunteer work & we cannot officially endorse NEAR Protocol.

Based on the registration data from Namastey NFT, the expected number of people to turnout for the event is 6K to 10K. Hence we firmly believe that the event provides us with a huge opportunity to tap & build the NEAR community activation in India & we should consider sponsoring the event under express sponsorship.
We want to add another $4500 for the original post above to include the express sponsorship fees & KalakendraDAO budget as well.

Please, Find the Attached for your reference. 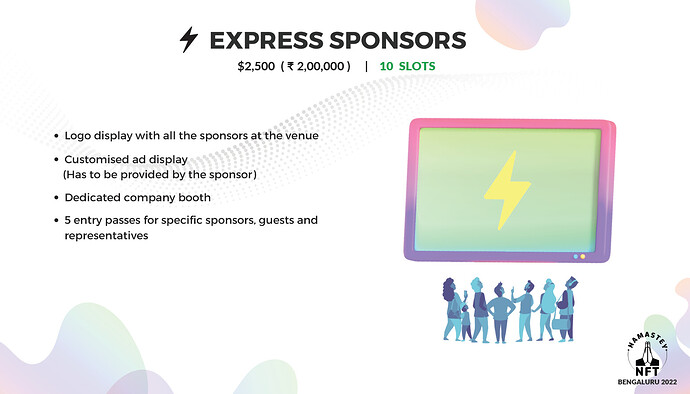 Hey @Monish016 , Is express Sponsorship is for the One project Show at a time or We can Add more Project there like Graffiti, Naksh, Goa Dao , Uniqart project

Can you Clarify on these Also, We can Have one meeting with Aswathy Regarding this .

Actually, I requested to have as a near protocol , where we can have various events planned throughout the event for 2 days within our dao, this can help us in collaboration as well