About:
NearNFT.io was launched on 25 January 2022. It was the first NFT Mint Calendar on Near. Upcoming NFT projects were listed up with all their details on NearNFT.io for FREE. And each of them were highlighted due to https://twitter.com/NearNFTio . In only 3 months 85 Near NFT Projects were listed up on NearNFT.io and we collaborated with +50 projects, especially with TenkDAO, Near NFT Club, Paras.id etc. to contribute the whole NEAR ecosystem. 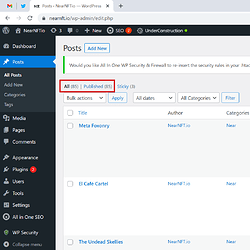 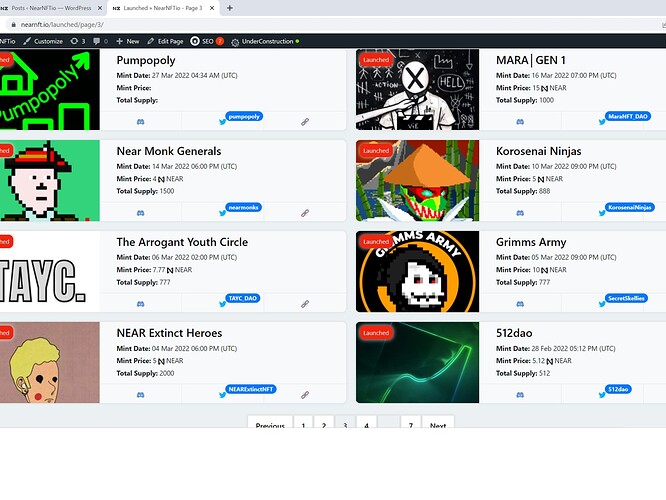 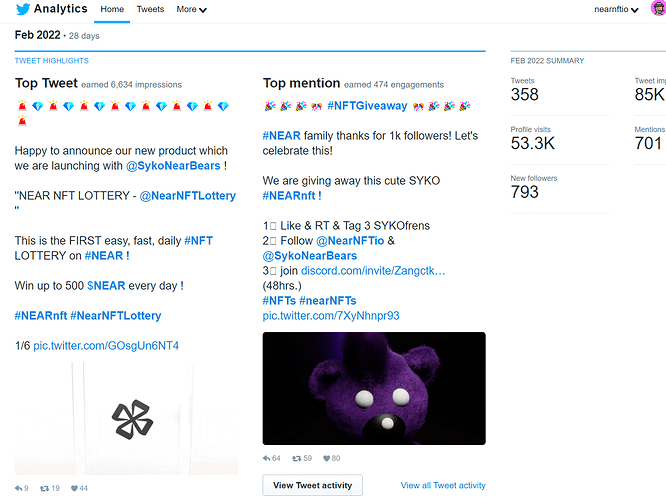 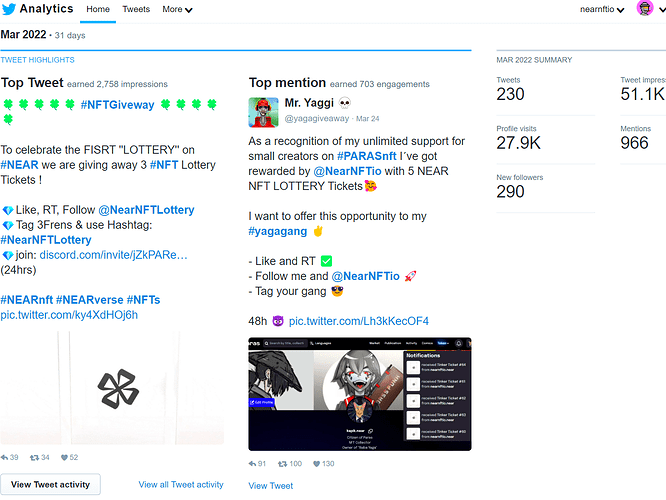 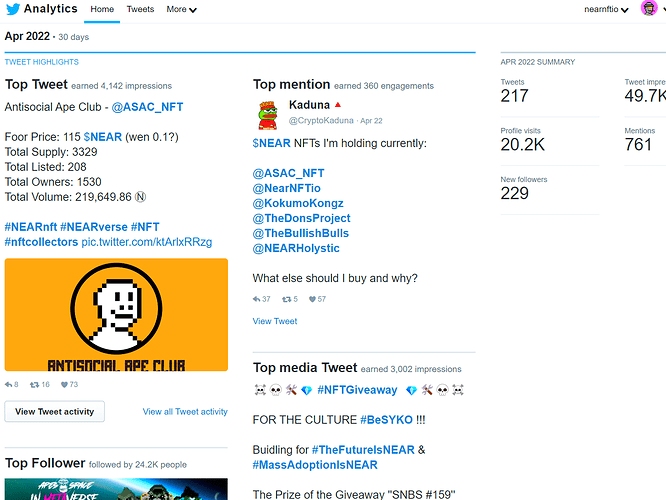 And one of the proofs that Near, NearNFTs and NearNFT.io were globally trends was that we had in 3 months approximately 5k unique visitors from 110 countries around the world with an average engagement time of 1m 35s from 84k transactions before we stopped the hard work on the project. 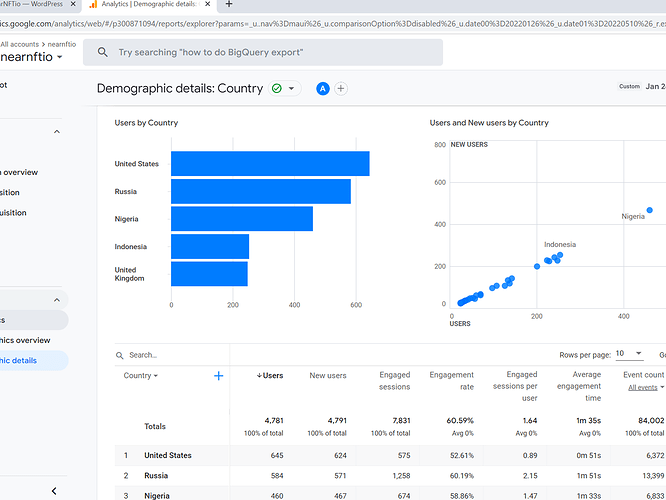 Links to the projects:
SYKO NEAR BEARS SQUAD
NEAR NFT LOTTERY
Near NFT Lottery

In the meanwhile, I got some health problems. And couldn’t look after all these projects very well. With that my exams started and I had to work hard for my MA. After that the markets went down and I was one of the Luna Veterans too. So I had to work a lot of in real life jobs. In a nutshell, I wasn’t active for two months, but I’m back. And I’ve overseen in the meanwhile that a lot of cool Near NFT tools have been launched. Which most of them are running Mint Calendars or highlighting upcoming drops. That means for me that this problem has solved and that there is no need anymore for a specific Near NFT Mint Calendar like my project. So, I’ve built up a small team (3) and we started to researching what the Near NFT ecosystem needs. And we looked up at the gaps which we can fill. After 2 weeks of a research, we decided to create a platform to contribute the whole Near and Near NFTs ecosystem through creative multimedia contents.

Rebranding & Redesigning NearNFT.io:
Now, we are going to start creating a new Website like https://nftnow.com/ , https://cryptonews.com/ , https://nftnewspro.com/ etc. but it will be something like between a news & blog website about NFTs. The main subjects will be about the whole Near Ecosystem and Near NFTs, but for gaining more transaction and onboarding new users to Near, there will be some popular news about the whole crypto ecosystem and NFTs from other chains too. Daily news about NFTs will be the main content plan, but our aim is to add daily/weekly news/blog writers from the Near Ecosystem too. Giving columns to DAOs, Guilds, Projects and Influencers/Degens where they can write their thoughts and share analyses about Near Protocol and Near NFTs. The second function of NearNFT.io will be highlighting weekly upcoming mints with all their details to support new NFT projects this way. In a nutshell, our aim is to create a website where people can find everything about Near NFTs and all around them with the latest news and highlights.

YouTube:
When I was very active and had the liquidity to fund some creative contents, I started the YouTube channel for NearNFT.io for introducing the Near Ecosystem and Near NFTs. But I could only come up with one video before I went passive.

This was the first video. But now, we are planning to improve this channel for onboarding new users to Near and Near NFTs. Our plan is to create creative video contents for two main subjects: The Near Ecosystem & Near NFTs. And this will be in two ways: Reviewing basics of the Near Ecosystem like the video above and creating creative explainer animations like white board animations etc.
We are going to start with a new Near Wallet video, because of the new changes and speculations around it. Therefore the next video will be about Near.org and all the opportunities about Near Protocol. Next to this we will start a video series about NFTs for non-web3 users in basic style to introduce them the hinterland. According to that the next stage will be about Dapps and NFT projects on Near.

The main aim at the start of these creative video contents will be creating the basics of Near where everyone in the ecosystem can use and share it all around the world for onboarding new users. Because of this, the first stage contents will be easy and smart, so that everyone can easily understand them.

I was running NearNFT.io on my own

Thank you, I like your project and use it to find out information about new nft collections.

Thank you, I like your project and use it to find out information about new nft collections.

Such an honor! Happy to hear about that! The new version will be better than ever!

Thanks a lot for your support!

Thanks for your detailed proposal, including context of all the body of work to now and clear plans and metrics for growth going forward.

I support this proposal.

Cool concept. If you can keep up with the release of new projects, this should be an interesting way of building hype. You have my support.

Thank you @satojandro !
I believe that working with clear plans is the key of real success and I hope that we will achieve our goals this way.

Huge thanks @Klint !
We will definitely keep it up! There will be a special ‘‘Upcoming Drops’’ menu on our website where new projects will be listed up and detailed articles will be posted about them to increase their visibilities.

Thanks for your guidance @Dacha !
Wish you an awesome day too

Here is my AstroDAO link:

happy to see this proposal approved. I met with the founder

I think this initiative will be an great tool for supporting NFT ecosystem on NEAR by helping them get enough exposure around Near NFT ecosystem and also help drive traffic from other crypto communities. I hope it will be successful. Congratulations @NearNFT.io_SYKO

Yes, we had some meetings

Happy to see your support and thanks for all the guidance on NEAR! We are working hard and I hope&believe it will be the Nr. 1 Near NFT platform for onboarding new users to NEAR.