Thanks, @Dacha for highlighting this. As the list is not a finalized one yet, we will adjust based on the feedback as well. Noted as both of the projects have not given us any response yet.

Hi.
What are the expectations of your offer for Nearcon2022 and what is the result you can provide? You have written projects with which you will cooperate, but there is no comment about them. You write in the comments about cooperation with the project, but they are not in the list. On what principle did you make this list?
Thx

Thanks for your proposal,

I am happy to support this proposal, always excited to find new ways to promote existing projects on the broader NEAR ecosystem to help them succeed. It is clear that NEARCON is a great opportunity to present your product to thousands of people, hopefully get a big spike in awareness and adoption.

I do have a couple of questions and comments,

Considering the incentives (a Grand prize) please make sure that the submissions for each project (questions and answers) are done separately. It would be very easy for any project to cheat and look at all the answer from all the other projects. It would also be very hard to police or monitor, just gotta get the design right from the beginning.

My only reservation is the inclusion of Stader Labs. They are yet to compensate the users that lost funding following the NEARX exploit. I am both against them spending any money until they have settled those liabilities and on using community funds to promote them until they make good to all affected users and have successfully migrated their smart contracts, etc. Please consider removing them as partners.

Thanks, @Dacha for highlighting this. As the list is not a finalized one yet, we will adjust based on the feedback as well. Noted as both of the projects have not given us any response yet.

Thank you. Happy to support. Please DM me on TG , I can connect you with some projects and guilds.

It’s not a very long time until Nearcon. It’s a yes from me. But please let us know if the turn around is now too short.

Have created a pool on AstroDAO as instructed.

There are still time available for this to go through as we are distributing the prize based on the response from the participants until the end of NEARCON2022 (or slightly beyond based on whether there’s any grand prize winner).

To reply your concern:

Hey, thanks for your sharp question. Here are the feedbacks from the team:

Hey @Dacha all done with Poll on AstroDAO (approved as of 10 Sep 2022) and Ironclad submission.

There is a misunderstanding going on for who the Grand Prize winner is as the rule is not understood correctly. The team would love to clarify through the Twitter thread.

Anyhow, we are finalizing all the winners including the 30 puzzles that we put together. The prize will be distributed as stated in each puzzles and all transactions record will be published here.

We are still pending for the funding from Marketing DAO, Octopus Network and few other Partners.

Hi.
The terms of this contest are violated on the following points in my opinion and this is the opinion of the Atocha chat community and Twitter subscribers.
The contest conditions specify the time 6:00 UTC, how can the puzzle be solved 90 minutes before the official time? Why don’t you respond to messages on Twitter and Telegram? Why is your winner anonymous? Share the winner’s information on your version. A person who considers himself a winner has shared his information openly. Here is the evidence for my arguments. 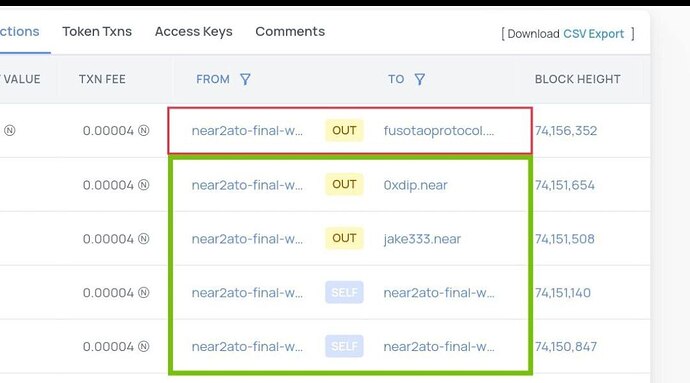 Here is the transaction Polkadot/Substrate Portal

Thanks for getting to this issue and I would personally like to clarify all the doubts.

First of all, the team and I will never want to be “cheating” or getting behind the community just to “scam” for something that isn’t ours. We standby the value of Treasure Hunt which is to explore and expect the UNEXPECTED.

Let me reply to your concern one by one:

I am deeply saddened to see such thing happened to the NEAR2ATO Treasure Hunt which we spent a lot of time putting resources together. I do hope that the community can stand by us as the proof is solid as rock that we are doing this professionally. Of course, we are sorry that we did not follow the time strictly to create the FINAL PUZZLE, we admit that but the result is FINAL. We still stand by the ONCHAIN RESULT which is ultimate.

Sir first of all they release their final puzzle before one hour of official announcement how can we know ,puzzle is started we wait for time.

They put one more concept Easter egg that is not mention on Guidelines what is that.

Hi.
We will wait for information about the anonymous winner.
Thx

Highly disappointed by the actions of the team. All things which came out in regrads of final puzzle are so messy.
Had attended quiz and events like this in past on discord and telegram. Since i am more active on telegram and have participated in far more organised and planned quiz. And i think @KriptoRaptor and @Kv9990 along with other mods were also there when near quiz master had put out the puzzle or any quiz as such. What if in those event they announce time of 6.00 for event and start it 1 hour earlier without any announcement. But they are very transparent with their decisions.

And yes the puzzle is on chain and anyone who is online at that time would solve the puzzle. I had put an alarm of 5.55 so that i dont miss on final grand puzzle. But bingo even before that the puzzle was solved which raises tons of concern.

And honestly none of the proofs you are sending here or on twitter make any attempt to filter the doubts and shadows on the fear of insider winner.

So only thing here what the bare minimum can be done is sharing the twitter of winner. The community just want to check if that person has made any efforts to solve any of the 30 puzzles which also had prizes or the winner is someone who only wins the final puzzle.

They have already denied the same. Have asked them 100 of times stating the reason.
But they are not ready. And it seems it doesnt exist

Sadly even after the warning of bad actors given by you here, i highly suspect that is how the things have folded in the end.
Now its not even about the grand prize anymore and its more about principles now, i highly believe in transparency here as funding has been done on the forums and need clear cut answers which admins in the telegram chat have denied straight forward.

Expect the unexpected. Ok so what is unfolding in the community is on the same lines that is on discord, telegram english telegram russia and twitter. there is just one thing being said of the puzzle being rugged for grand prize.
I will reply one by one:

And then you can follow up as to what bloodbath has taken on the chats.

I am deeply saddened to see such thing happened to the NEAR2ATO Treasure Hunt in which community members spent a lot of time putting time, efforts, read materials and sacrifice sleeps altogether. I do hope that the atocha team can stand by truth as the proof is not solid as rock & what team is doing is very amateur. Of course, community is frustrated that you did not follow the time strictly to create the FINAL PUZZLE, and even after initially denying the same until given the proof on chat itself. I as a community member feel being cheated by the methods of team which is ultimate.

Attaching the denial on timer thing and what followed:

Your website said that grand puzzle will go live at 14 september at 6.00

Alright, conclude a few points here: 1. The final puzzle has no exact time release but the team will be releasing today at any moment 2. The grand prize is confirmed being won by one of the active members in the community, we are proud of the...

1. Your page clearly mentioned date and timings for grand puzzle. So i disagree on same. 2. No idea. 3. No idea what it means and how its done. 4. I knwo the efforts team made. 5. Fine. 6. Same for your efforts team. I know how much efforts were...

Thank you for your reply. 1. As far as I am concerned, the page only state the date and no time indication is given. 2. We will make the announcement once it is verified. 3. We will release the verification proof. 4. Thanks 5. Thanks 6. Again,...

Got it, will make sure we take note on that and never repeat that. Apology for that.

Succesfully wasted over 5 days in all this. Not going to do anymore on this, This is just unproductive as team is rigid and non transparent.

Anyways a huge shout to Near Foundation and all the community for making this Nearcon such a successful event.

Tagging @Dacha to kindly look in all this and be the guardian here. And take this forward from here as i have very limited knowledge on the near forums and how they work.
Wanting to tag illia too but that is for some other time as he must be busy in many other things to near greatest.