Good day everyone, I am pleased to announce that KIL DAO has organized two successful shows in January. We have onboarded more than 40 new members to the NEAR ecosystem and achieved our largest crowd attendance at The Playground @Cryptovoxels. Moreover, we have featured artists from Singapore and Malaysia who are now a part of the NEAR community. We would like to keep that momentum by organizing our 7th KIL live show along with a launch party for dreebsby.near. KIL also aims to feature a brand new act from Asia who we would like to introduce to the NEAR ecosystem by forming collaborations with Mintbase and NXM. KIL DAO has garnered interest from other artists and creatives who would like to be a part of our council. We are looking at expanding our guild/community by adding 3 more members to our council in March 2022. Through this projects. KIL will be able to establish our vision to be the DAO that promotes and showcases Asian musicians in the Metaverse. In addition to that, we would like to bring more music reps and musicians from Asia to the Near ecosystem. 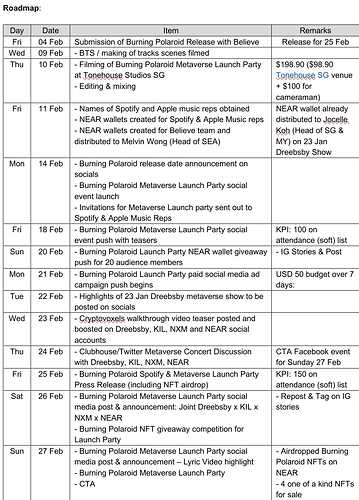 Report from our KIL Live events in January can be obtained here,

KIL DAO had a great start to the year in 2022 as we helped promote collaborative efforts between the NEAR community and musicians from Asia. Furthermore, we had two back to back KIL Live shows which turned out to be a tremendous success. Our target was to spread awareness for KIL DAO, NXM and the NEAR ecosystem. With that being said, we achieved our highest attendance for our showcase at The Playground, Cryptovoxels and on top of that, we managed to onboard 25 new members to the NEAR ecosystem…

Just checking if this is an typo or not

proposal looks good, just also checking on the 7$ DAO facilitation, is that correct?

Hey @tabear and @vandal thanks for pointing it out. It was actually supposed to be 7 NEAR. The reason we need that amount is because we would like to transfer from sputnik to Astro DAO. I have the adjusted the cost breakdown and funding required accordingly. Everything else is accurate.

Thanks again for pointing that out. Appreciate it!

All good from our side, just wanted to confirm

This proposal follows the Creatives DAO Guidelines, so it is approved by the Community Moderators. Please create a poll on the Creatives DAO astrodao [link: Astro] so that the council can vote. When and if the vote of the council is ‘yes’, approach NF for your payout proposal, following this guidelines: [New Process] Community Payouts

I have just completed that step.

Also ATTN to the NEAR Foundation members who are viewing this post, you can find the link to the poll for the Creatives DAO DAO for this particular proposal. PS we shall proceed to edit this one our poll has gained enough votes to pass.