Objective: The main goal of this set of projects is to continue the work of Gambiarra and build presence and visibility of Gambiarra, NEAR and Mintbase in the Brazilian NFTworld, through thematic exhibitions, courses, tutorials, experimental art and marketing materials in Portuguese and hopefully soon , also in English. Our intention is for the Brazilian visual arts community to get to know GAMBIARRA and get into the NEAR blockchain through our gallery on Mintbase. And for this, we are increasingly raising awareness about our gallery, our classes and our art which is the main goal of this set of projects.

Justification (benefits): The relevance of this set of projects is precisely to grow a large collective of artists in the internet media and in the eyes of their fellow artists, who can also work together. This kind of visibility is essential for a blockchain that needs to expand in the visual arts and in the Brazilian NFT community, which is quite large. Besides being important for NEAR and GAMBIARRA artists, these projects are also important to help the development of Mintbase in Brazil, which is an important NFT market in NEAR, as we are also producing tutorial videos in Portuguese about it and stimulating the coinage scene there. Our set of projects is also important for the community as a whole, as it brings more rewards to the system and thus brings the community closer to the GAMBIARRA Community and DAO.

The NEAR Protocol has seen many activities and events emerge in its ecosystem. This development can only be aware of the fact that the NEAR Protocol is conveniently expanding and providing solutions to individuals within the Web 3 ecosystem, such as our NFTs, our wallets, and various DApps. We at the GAMBIARRA Guild/DAO have been watching these developments for some time and decided to contribute our share of love and gratitude for the NEAR Protocol to help it conveniently expand into areas where it seeks more engagement and traction, which is Brazilian Visual Arts on Mintbase NEXT.

In August we were honored to have the following projects cited in the report below:

We had six exposures totaling ninety-three (93) NFTs in August, representing a 35% increase over last month.

In July we had:

In August we had:

It is interesting to note that we had a very significant increase in the amount of minted, as well as an increase in owners, indicating a growth in the number of sales in the store. Not surprisingly, Gambiarra Store is once again in the list of Mintbase’s best stores as printed below 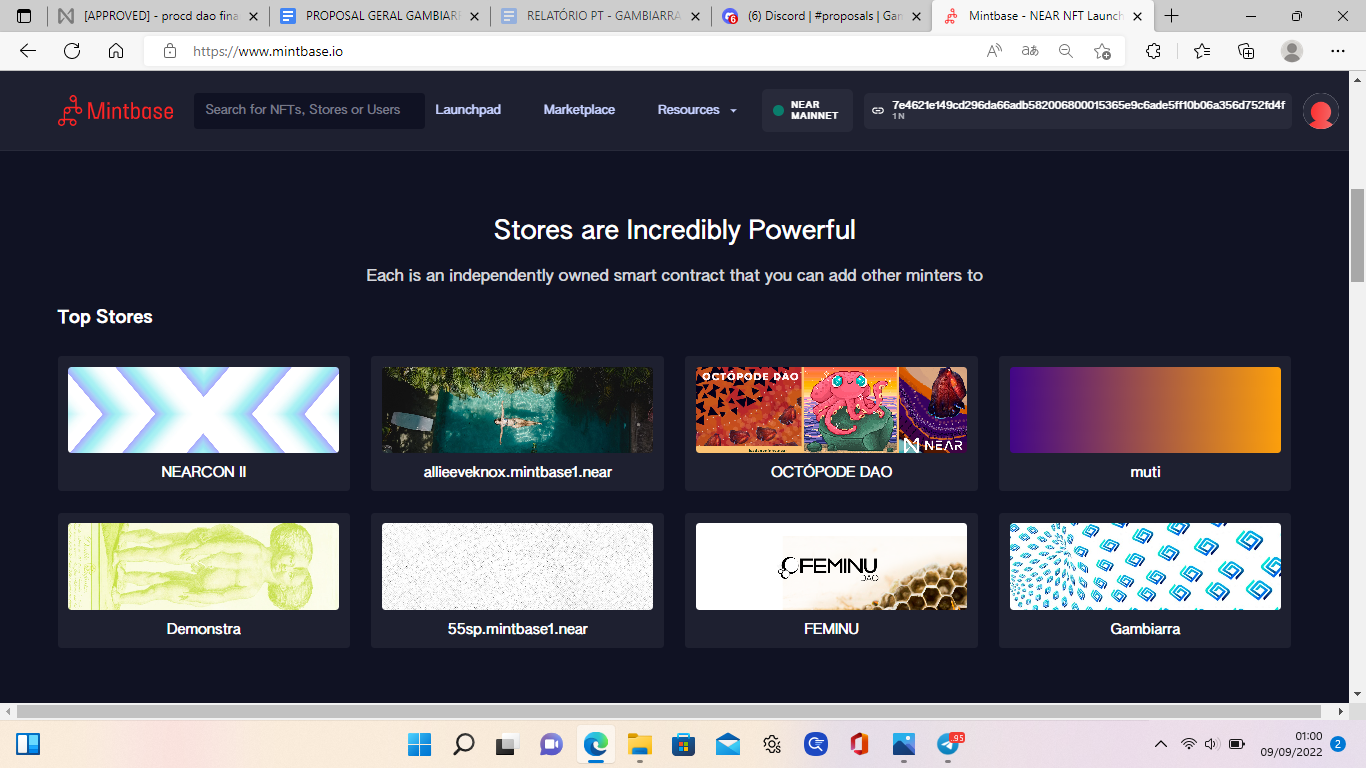 Learn below about the projects that GAMBIARRA DAO has planned for September :

PRODUCTS AND PROJECTION OF OUR EXPECTATION OF SUCCESS:

50 NFTs as a result of the events

400 Mints in the Gambiarra store

The importance of supporting our artists is very precious to us.

In this sense, we are asking for 5,000 USD in DAI so that we can support the community to continue to grow, with projects that have monthly editions and one-off projects that only happen once.

Thank you very much for your support @creativesdao-mods

Greetings to the whole Near community

Another month of projects that aggregate, allow exchanges, learning, and enrich the collective.

pride in being part of this team!!!

Dear Gambiarra DAO,
Happy to inform you that this proposal follows the Creatives DAO Guidelines, and it is approved by the Community Moderators.
Please create a poll on the Creatives DAO Astrodao, so the council can vote. When and if the vote of the council is ‘yes’, approach NF for your payout proposal, following this guideline: [New Process] Community Payouts.
Also, feel free to join our Discord Server to Post Your Monthly Reports and Funding Proposals for better organization.

thank you, Near community!

our dao is very happy with the approval of your proposal and to know that we are aligned with Near’s goals, and more, we are always available for any suggestions for improving our proposals to achieve even more Near’s guidelines.

We, Brazilian members, are open for partnerships in work executions to achieve all goals that Near has for Brazil.

Long life to Near, 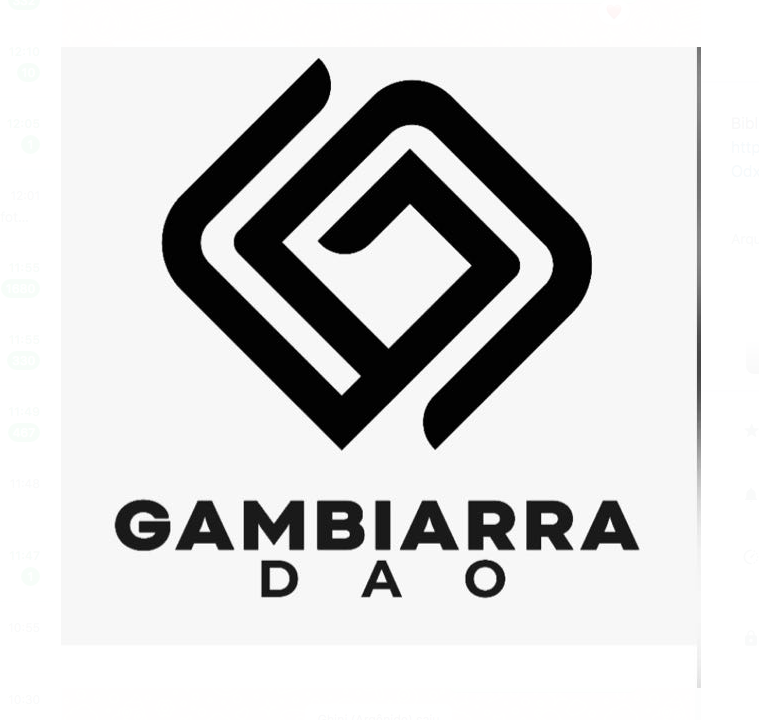 What we proposed in AUGUST: [APPROVED] Gambiarra dao funding proposal for September

See below what we accomplished in SEPTEMBER:

The service providers are paid for their work according to the proposals submitted, approved, and established in the final report.

This month the Marketing team did not have its proposal approved and even so the members did an excellent job and in a voluntary way so that we could keep moving our social networks and promoting our campaigns. Everyone contributed their best collaborating with the growth and visibility of the DAO and the projects that took place in September.

September was a month of great achievements in terms of numbers of Nfts minted and also in artist participation and visitation in our galleries, exhibitions and parties at Voxels. Through Isa Danoninho’s Banali project @Isa_Danoninho we received 2171 visits during its broadcast, and over the course of about 8h it was the most crowded event at Voxels and we came in 4th place in the ranking of most visited parcels. Isa produced in one of the floors of the building the Collection I of Gambiarra’s NFTs where a collector ended up buying the complete collection making our Dao increase its balance in Near focusing on our self sustainability. All this success was possible through the partnership with Menai Dao @Reiniscouple creator of the NFT São Paulo that kindly gave up her art gallery inside Voxels. (You can follow the complete report in the projects above)

This month we reach our 10th Edition of MintbaseSunday a very important achievement for our Dao, because through this campaign we manage to bring the community together each month and bring new artists to our store. Since now, we congratulate @macieira the creator of the project. 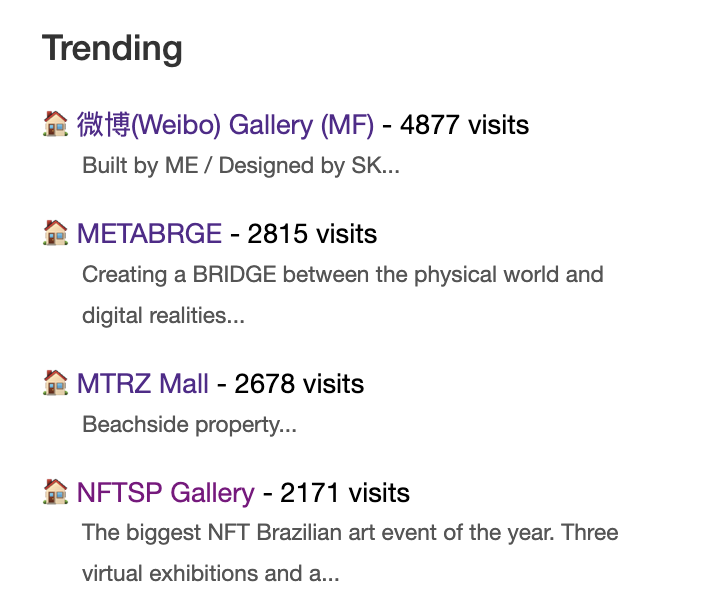 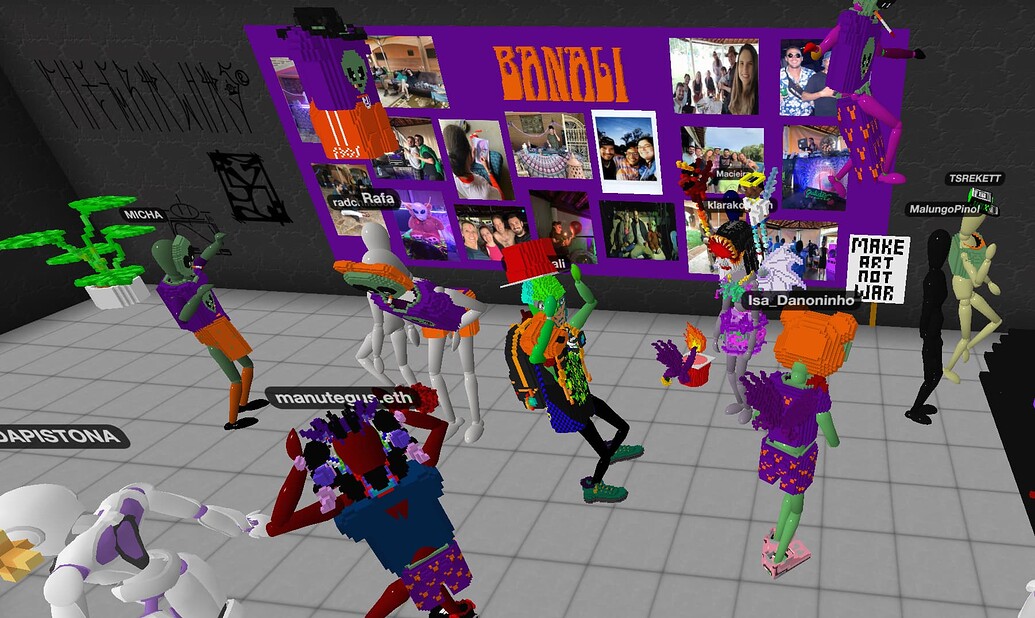 Confirming what we said above, we held 6 exhibitions for a total of eighty NFTs, representing a 7% increase over last month.

In August we held:

In September we had:

We can see a significant increase in the amount of mints, mints and owners indicating a significant growth in the number of sales in the store.
Another highlight of the month was the opening of our NearHub space bringing a solo exhibition geared towards community members, a memorial describing the history of Gambiarra and a members gallery for everyone to get to know the people who care for and build Gambiarra Dao. 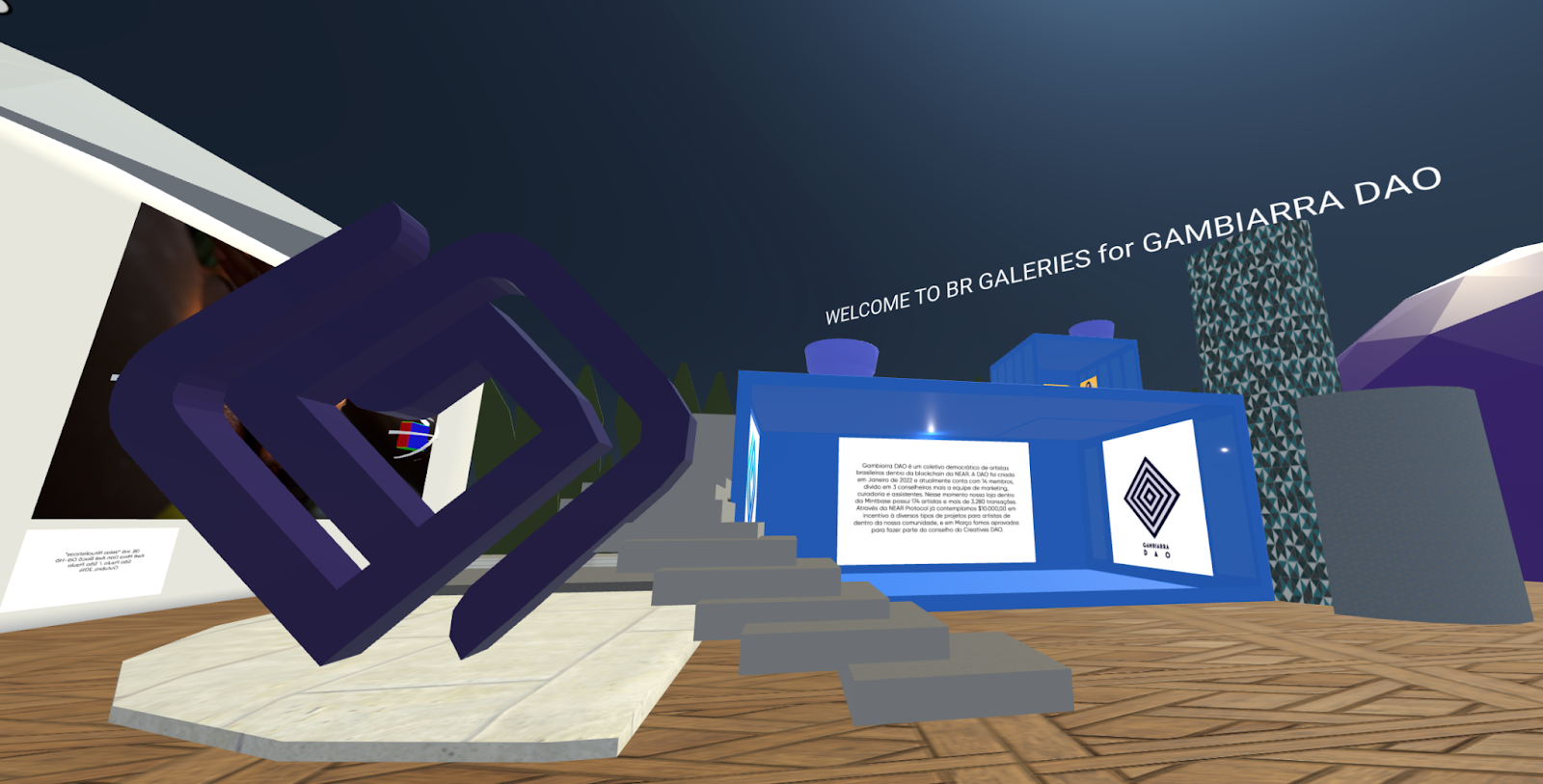 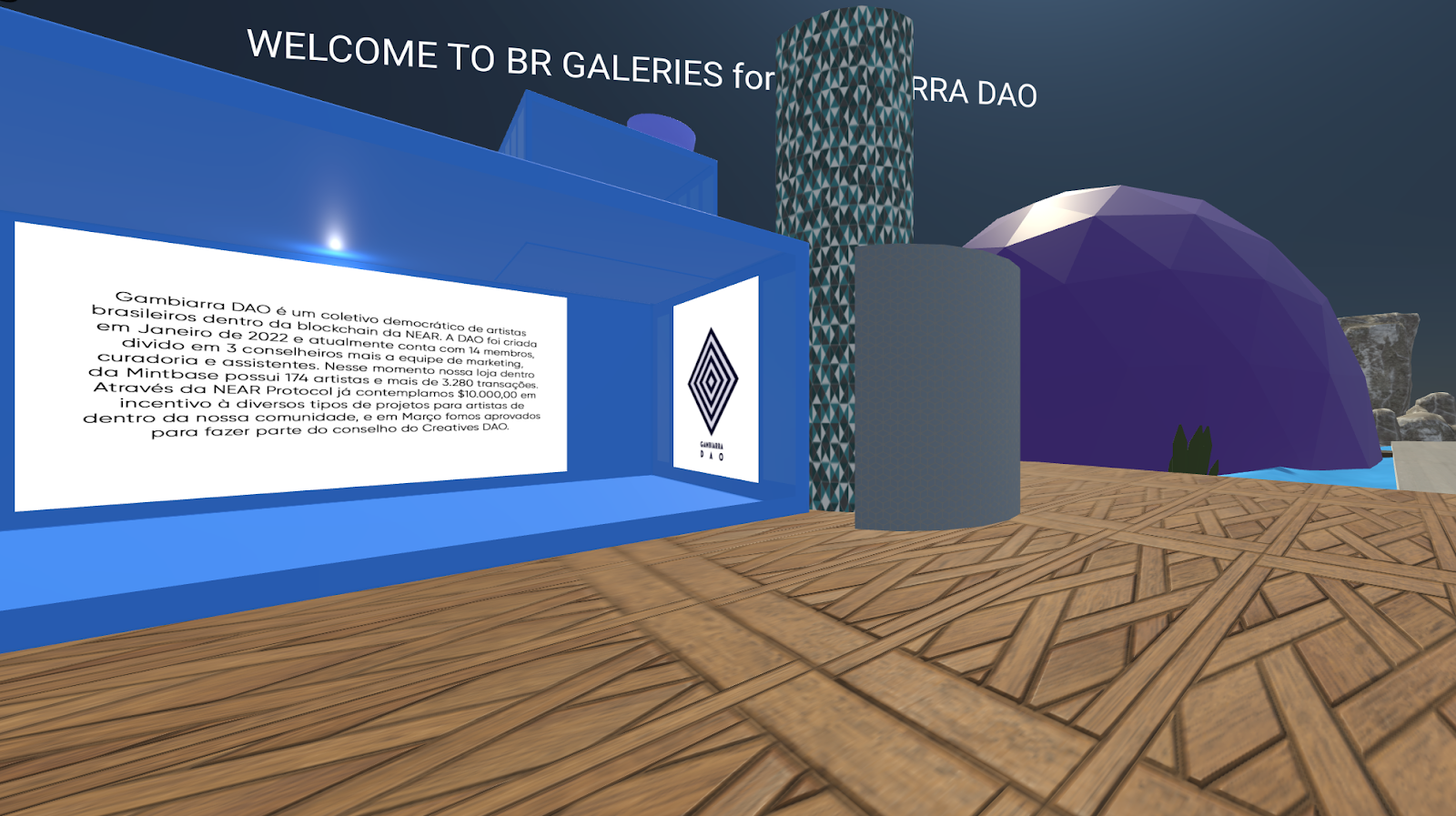 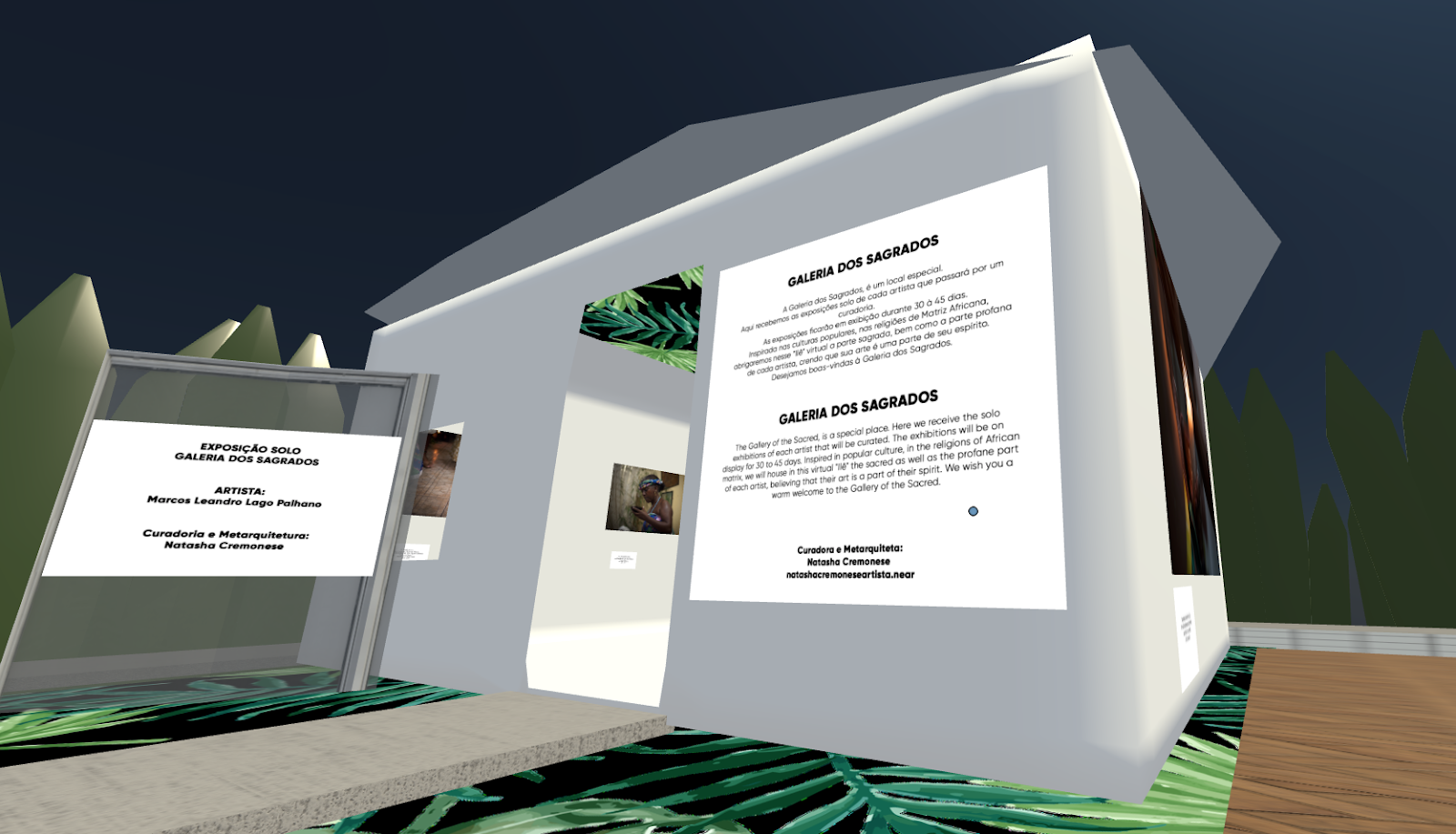 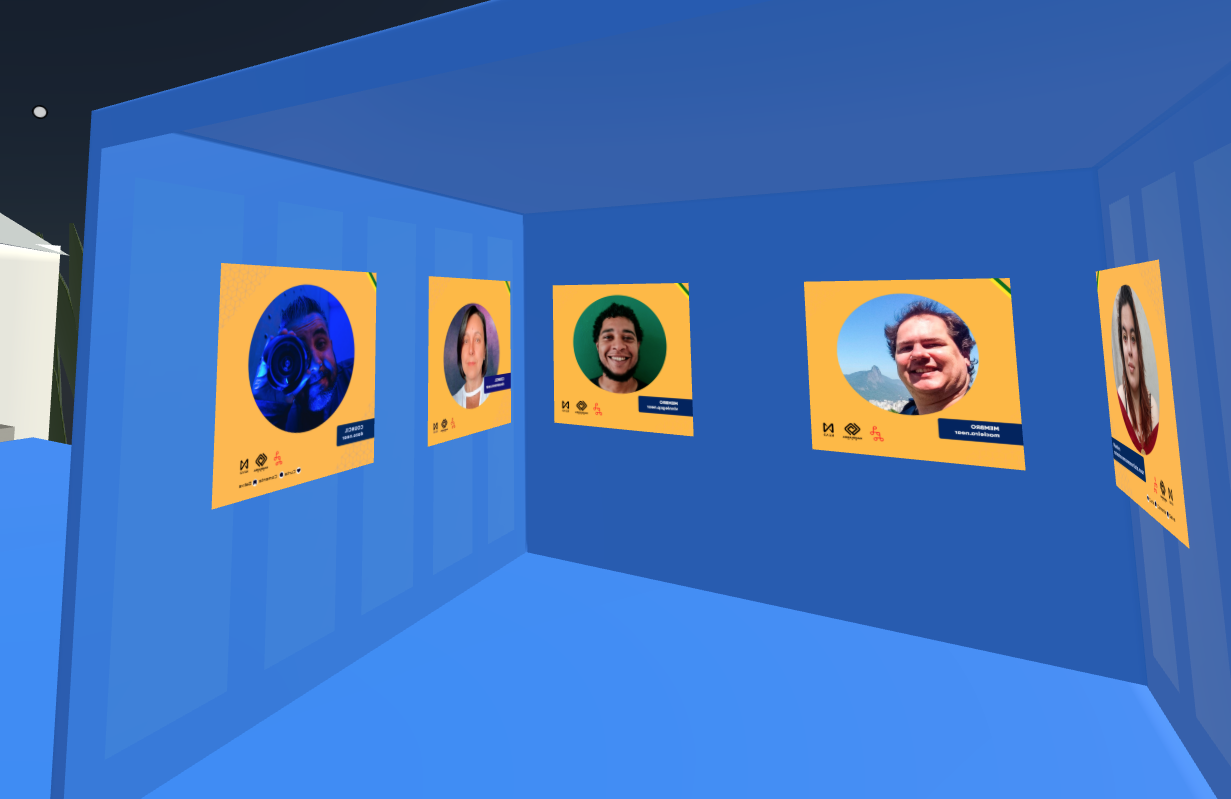 This month Gambiarra continues to be highlighted among Mintbase’s top 10 stores, as shown below

Through the Gambi project we began a process of research and data collection to understand the profile of the Gambiarra store and the artists who are part of it. This way, we understand that we can improve the management strategies of the store and its collaborating artists, bringing improvements and providing solid foundations for its growth.
Due to the payment delays and changes that have been happening for funding we had to be closer to the community and members that participate in our campaigns and rewards explaining to them about the changes and delays.
We continue to refine our automated spreadsheet for organizing proposals and funding received by the Near Foundation.
We continue our organization for self-sustainability.
We are working on writing reports, creating polls, voting to route payments, helping artists in the community, fundraising for Brazil, and helping artists better relate to and produce their works in the Near ecosystem.
We are looking for new contacts and partnerships to hold a face-to-face event in November.

An advisor has an instagram highlighting the moves of DAO Gambiarra that can be checked out at - https://www.instagram.com/s/aGlnaGxpZ2h0OjE3OTcwNDIxODc2NzU4NDUz?story_media_id=2918722301092751672&igshid=MDE2OWE1N2Q=

We are learning how to better organize the DAO and projects, and that we should create more and more partnerships with other friendly DAOs to do bigger projects and bring more opportunities for the community.

In this sense, as an example, we brought the NFT São Paulo event where DAO was invited to participate by the @Reiniscouple

Since the invitation received in early September, is weekly agenda of the DAO meeting the subject of how the Gambiarra will participate in the event organized by Reiniscouple. The event will take place physically in the city of São Paulo, at the Immigration Museum - https://www.museudaimigracao.org.br/

Besides this partnership we can also bring the partnership with the space ‘‘Decentraland’’ where we will exhibit the works of the works - [REPORT] ONGOING Gambiarra Collection IIl - and the other exhibition - [[Concluded]] recite poetry: Machado de Assis - #9 by Carlos - which will be exhibited from 10/18 until 10/25.

We continue to do our organized work in the cloud that can help future members and the Gambiarra board.

We are aiming more and more our weekly meetings to reflect and improve the month’s projects in order to achieve their economic self-sustainability. In our meetings, always on Tuesdays and in the evenings, the subject is brought up and discussed among members and collectively thought of proposals to be implemented.

Contacts have been initiated with university art students in order to present the ecosystem to them and together we elaborate projects for their entry into the ecosystem and production of NFT’s from their work. Gambiarra is preparing a proposal with this goal for the coming months.