@Ghini . Congratulations! The proposals being proposed by FEMINU DAO are very cool. Proud to be a part of this community.

I’m so exited! It has been very nice keep up the work of this wonderful artists. Congratulations all for your proposals!

Thank you @giogoretti! We are honored to have you in this group.

Thanks for your support @l3v1at4 .

@l3v1at4 we are looking forward for yours

Dear Feminu DAO,
Happy to inform you that this proposal follows the Creatives DAO Guidelines, and it is approved by the Community Moderators.
Please create a poll on the Creatives DAO Astrodao , so that the council can vote. When and if the vote of the council is ‘yes’, approach NF for your payout proposal, following this guideline: [New Process] Community Payouts .
Also, feel free to join our Discord Server to Post Your Monthly Reports and Funding Proposals for better organization.

In an effort to become more transparent in decision making I also want to note some highlights why your proposal has been approved:

@Paul
On behalf of all FEMINU DAO members we want to thank you and all moderators for the trust and the opportunity to develop these new projects, which make us very proud. Be assured that we will do our best for the growth and development of the Near community.
Best,
Mayra and Ghini

P.S.: We are in the Creatives Discord but we can’t find the tab to post the report and general proposal. Could you help us please? Below the Astro link. Thanks

Hey @Ghini maybe it’s connected with your verification on the server? I’ve assigned to you a Creatives role there, hope it’ll help!

If you still have issues with finding the needed tabs, please try to visit “verification” first to confirm that you are real person

Once you will have fully acces, you should see the below look, the needed tabs are “monthly-dao-reports” and “monthly-proposals”, as per example below:

Also, don’t forget to submit function calls in other DAOs that belongs to Creatives DAO council members in order boosts approval process of the poll!

@Paul
It was very helpful, Paul, I have now managed to post July report and August proposal. We have already done the cfcs.

Thank you very much for your support.
Best,
Ghini

Hey @Paul ! I filled up the form as soon as our proposal was approved by the DAOs but didn’t received any e-mail until now. What do you suggest I could do? Thanks
Best,
Ghini

This process depends on NF now. Community moderators don’t have any insight or impact on payments status, however, please stay patient, as it usually takes two weeks (more or less) for NF to process everything successfully.

Soon, you will be asked in the email for the invoice to NF, please check this guide for more info:

Dear community, With the new updates in community payout process, I realized that DAOs/representatives of DAOs need to create an invoice to complete the Community-Rewards Agreement to receive your fund. After finishing the process and receiving payout, I noticed there’s some slight difference between the instructions sent by NF and the actual UX on the website. So this is to help the community finish the process easier, step-by-step. After signing the Community - Reward Agreement, you’ll then…

Thank you for your prompt reply. I was afraid I did something wrong because it’s all new, but now I can be patiente because it has not been two weeks yet. I will check the guide! Thanks! Good night!

Members that left the DAO:

Marcia Boni and Naju requested to leave as a member, both for personal reasons and the proposal was made on Astro. 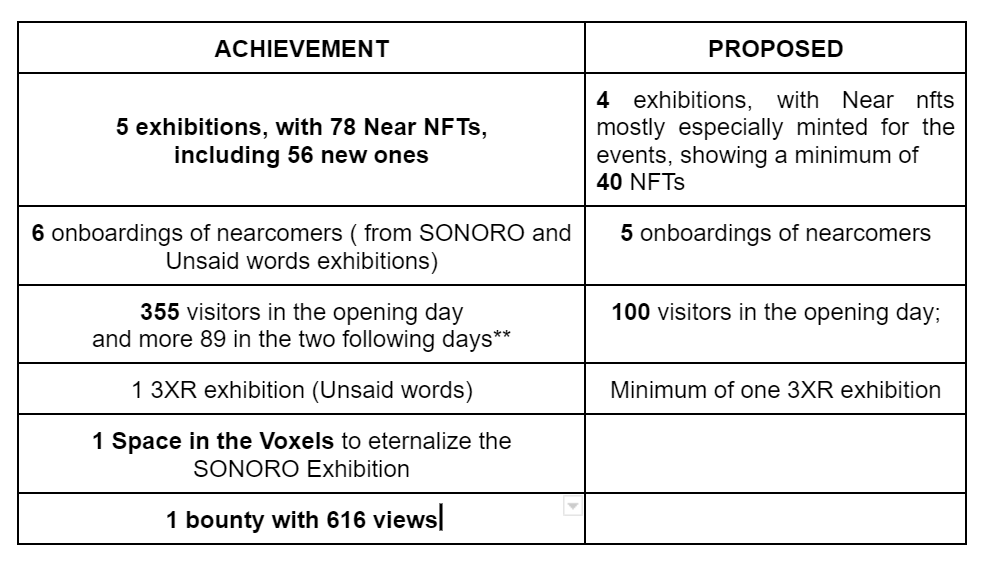 This month we had many highlights.

Two events were very important when it comes to inclusion:

Another very important sound-related event was developed this month - FEMINU MUSIC, which brought great engagement and diffusion of the NEAR application, ENDLESS, providing a large number of onboardings (5), generating 3 new NFTs and which continues to draw attention on FEMINU’s Youtube channel.

We also started a series of Fundraising Courses, which had a large number of interested people, attracting other DAOs that are on the path of their sustainability and for that this course was very valuable.

Visibility for Near blockchain: a big party in the courtyard of FEMINU was animated by DJ May feat Junix with the opening of 5 simultaneous exhibitions, being four of visual arts and one sound one. It was a success, given the number of visitors we had, 355 on the opening day alone, and for this reason we were among the top 20 most visited exhibits of the week in the Voxels metaverse.

The proposals that were part of this event were all carried out successfully within the schedule, contributing to the metrics achieved.

REPORT: FUNDRAISING WORKSHOP Proponent: Dra. Giovana Goretti Feijó de Almeida NEAR account for payment: giogoretti.near Objective: This course is intended to bring opportunities for DAOs and to all the members of the ecosystem to become professionalized in management, project development and fundraising, aiming at the sustainability of the Near communities. Justification: Benefits: Sustainability: DAOs (Decentralized Autonomous Organizations) are independent communities that have prol…

[image] REPORT - SONORO: OTHER PERSPECTIVE Project Status: IN EXHIBITION PROJECT ACCOUNTING: The Virtual Exhibition SONORO: OTHER PERSPECTIVE is going to take place between August 28 and September 28, 2022, at the Vibes by de C. building, FEMINU Gallery in Voxel. The Exhibition includes a total of 12 artworks by 4 artists. The exhibition’s expography and curatorship were the responsibility of @ghini, and the organization of the exhibition in Voxel and the sound’s fine-tuning were under @ra…

REPORT : Unsaid Words PROPOSERS: @Naju PROJECT LINE: 26/07 to 28/08 Holding an exhibition on the metaverse of Voxels at the FEMINU gallery on August 28, along with a discussion on art and mental health with guest artist, eusouaguerra.near. OBJECTIVE: The intention of this project is to take sensitivity to a high level, making other people realize the importance of expressing and recognizing certain feelings, through art, making viewers create awareness of the relevance of art in the sentime…

Write reports, create polls, vote to forward payments, logistical organization of projects run in the month, meetings with project proponents, orientation and support to new artists who have onboarded regarding how Astro works, the Forum and how to mint.