[Approved] Creating a video for Near Protocol with DeFi Teller

The purpose of this proposal is to obtain partial or full funding for the creation of an educational video about Near Protocol.

Although Near Protocol is one of the largest projects in DeFi sector, we were unable to find high-quality video content about the network. Existing videos are too long, include unnecessary information and don’t provide sufficient information on the technical aspects of the project repeating common marketing descriptions.

We will be happy to fill this gap. Since Near protocol is quite complex in its design, and its core concepts are not easy to grasp for newcomers to the field, we propose to make a detailed video explainer about the technological aspects of the network, its key ecosystem components describing in simple words how does Near’s consensus mechanism work, what makes it highly scalable, what is Doomslug, how the technique produces blocks and achieves finality, how it differs from PBFT, Tendermint and Hotstuff, how does the network leverages sharding, how it achieves interoperability via Rainbow bridge, what is the utility of NEAR token and much more.

DeFi Teller is an educational resource that does the due diligence for the user by providing information about blockchain technology and decentralized applications (reviews, video explainers, on-chain data) in the most accessible way.

​​​​​​​The project officially launched in May this year, and currently, 15 people are working on it (developers, designers, illustrators, editors, writers, and marketing specialists). During the short time of its existence, the project has managed to attract the attention of those we talk about. For example, the video we created about Polkadot was added to the Polkadot and Kusama documentation, and the video that we made to explain the Avalanche consensus was created together with the Ava Labs team and highly appreciated by the community.

We want to create a resource that would motivate users to study the technical component behind DeFi projects and shift the paradigm from “What coin to buy (and what buttons to press to do it)” to a deeper understanding of the technology behind the most popular projects and blockchain in general.

What we are good at:

Writing scripts targeted at an audience with an average level of knowledge in blockchain. We target people who have basic understanding of how blockchain works, as well as cursory understanding of the crypto market and its key players. Our viewer has probably already used dApps on the simple purchasing/trading/borrowing/staking level. Our task is to immerse this user deeper and explain in simple words what technology stands behind a particular project. In doing so, we take the presentation format very seriously and try to dig deep, figuring out what is under the hood of technologies and projects and what exactly makes them special. For example, this is how we explained the difference between optimistic and zk-rollups.

Creating distinctive visuals. The DeFi Teller team only uses original illustrations and takes a thoughtful approach to the process of video storyboarding. Our team of illustrators and animators works tightly with the editorial team, and the team of the project we’re reviewing. We welcome any kind of feedback or criticism from the team we are working with.

The existing DeFi Teller videos were created with our own funds and were highly praised by the teams of the projects we were talking about.

Moving further, we see our development in line with the spirit of decentralization - we would like to continue to talk about the most interesting DeFi projects and do so with nice graphics and quality scripts. We’re not looking for profits coming directly from the team, nor are we looking to create entirely commercial videos, reserving the right to choose the topics and angle of their coverage. All we need is to cover the cost of the video and support us in distributing the content (retweets, adding to the documentation, and so forth).

The video creation process is as follows:

The timeline of the video depends on its budget. Without expanding the design team, and given that edits and comments from the team will be provided promptly, we can produce one video in about 3-4 weeks.

1 week to create and edit the script (two editors involved, 4 hours a day each);

1-2 weeks for the animation (two design team members involved, 5 hours a day each).

This is a preliminary estimate, the final estimate depends heavily on the script.

How will it bring value to the Near Protocol:

-Illustrate the architecture of the protocol;

-Illustrate use cases of the project;

-Attract new audience (the video will be published on all DeFi Teller resources, giving Near exposure to new audience);

-A branding tool that will show the existence of high-quality content about the project.

Input expected from the Near team:

Our team will be able to give you an accurate estimate of the budget only after the script is approved, since most of the cost of the video falls on the work of the illustrators and animators. A rough estimate is that on average one minute of video costs us $1,000.

The approximate cost of the final amount in percentage ratio looks like this:

Hello, Thanks for detailed proposal. This fits #marketing #marketing:marketingdao category so It would be visible better if you can edit into the right category.

Hi.
Your YouTube channel has 371 subscribers. For 2 months, there were 1400 and 1600 views on educational videos that you paved to the offer. As far as I know, the average user with an understanding of the blockchain can write scripts himself. Your video is informative, not educational. Your content is well presented. After watching your videos, I still have a number of questions, who can give me answers to them? There are a lot of videos on YouTube about blockchain, building blocks and protection systems. Such videos are available from the developers of the ecosystem. You are right that these videos are long in time, but they reveal in more detail the questions that arise from users. How can your videos bearing informative material help the ecosystem?
Thx

Hi, yes, it’s true that our channel is small, but we have just started our way and that’s the reason why we are not looking for profit and just asking to cover the production cost.

I agree that there are a lot of channels producing videos about blockchain and DeFi, however, most of them use very low-quality graphics stylized as clip art or “talking heads” format, this allows the videos to be produced fairly quickly and inexpensively. The scripts for these channels are not succinct and tend to give the user a cursory understanding of the companies’ activities and often repeat statements from the companies’ official press releases, instead of “decoding” them and letting the user understand what they mean technology-wise.

Some people may prefer to spend hours looking into documentation or watching long videos where the best developers explain what is behind certain technologies, but we don’t think it is the best way to attract the audience.

We want to provide a concise quality overview of the project which would spark viewers’ interest and encourage them to dig deeper. Our goal is to further educate these users and engage them in a field that cultivates technology and knowledge.
We try to make the scripts more concise and under seven minutes in length as longer videos can affect the perception of the information. In cases where a project has too much information to fit into one video, we believe it is better to make a series of short videos rather than one long video.

Can you elaborate on the subject of the video and the learning objectives?

What will the video cover?

Input expected from the Near team:

Thanks for your proposal,

I’ve had a look at your channel, few notes and questions:

While the price point a little bit high, specially if we were to have more videos made in the future, I believe this is an experiment well worth trying

I support this proposal

Hi @CamilleHanard thank you for your proposal.

I have read your proposal and would be willing to support the production of a short and effective video that answers the question - what is NEAR?

I have a few comments on your proposal:

Proposed length - i see that you have budgeted for $1000 per minute but you have not indicated the total length of the video - is it 7 minutes?

Subtitles - would it be possible to find a way to make this video multilingual? Auto generated subtitles would help to spead the message to non english speakers.

If approved, i would ask that you keep the community informed of progress, particularly with regard to reviewing each stage and the opportunity to give input.

While there hasn’t been much traction on your youtube account, it seems like you’ve got the right level of overview and planning to make this a worthwhile effort. You have my support.

1)Proceed to Poll on AstroDAO .
2)Once the poll is approved, you need to submit THIS form Ironclad .

How to create a poll? Here is instruction .

At this point, we’re thinking about 5-6 min video, but we can figure this out once our editorial team starts doing research and drafting the script

In terms of subtitles, no problem we can do it multilingual if the proposal if approved

Glad to hear that, thank you! I’ll create the poll 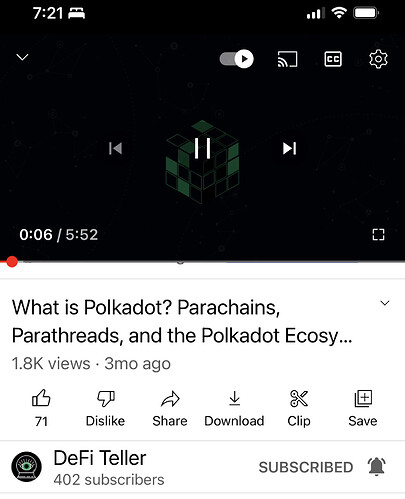 Hello @CamilleHanard ! Your proposal has been approved, but you haven’t created a pool on Astro DAO…

@Dacha Hey thank you so much for following up. The poll for this proposal has been created.